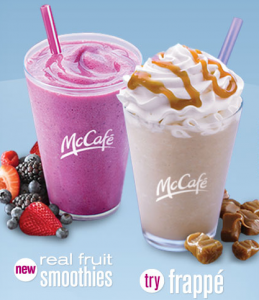 As fast food chains become the scapegoat of the obesity crisis, McDonald’s has been doing its fair share to change its reputation as an artery-clogging, obesity-inducing hamburger chain. So the recent introduction of smoothies to their menu shouldn’t come as a surprise to anyone.

McDonald’s smoothies, marketed as being made with “real fruit,” have already hit many of the McCafe locations of the chain, and are reportedly selling better than expected, particularly among their target audience: women. As such, the golden arches now have big plans to launch the beverages in all of their 14,000 US locations.

And why not? Isn’t a fruity drink better for you than a soda?

Here’s the reality: McDonald’s smoothies are full of sugar, and sugar equals calories. In fact, a small strawberry banana smoothie has 210 calories — about the same as a small order of French fries or a medium Coca-Cola. The large smoothie has more calories than a cheeseburger — 330 calories to be exact. And there’s 70 grams of sugar in that one. Wondering where all that sugar is coming from? According to McDonalds’ ingredients list, these smoothies contain sugar from pureed fruits and fruit juice, as well as added sugar. That’s a lot of sweetness for one beverage.

“These smoothies are very high in sugar and there are way too many calories to have as your beverage choice with a meal,” said Keri Gans, a spokesperson for the American Dietetic Association. Enjoying a smoothie with your quarter-pounder meal is a no-no, but what about a smoothie as a meal on its own? Gans balked at this idea, too. “They have very little protein, which is important to keep a person satiated until their next meal.”

Still, they’re far from the worst thing on the menu. “If you’re on the run and you really have no other choice than one of these smoothies, choose a small one,” Gans added. And they’re a much better choice than the strawberry shake, which has 570 calories and 17 grams of fat in a small, but that’s not saying much.

The moral of the story? Smoothies are one food you need to be careful with — In fact, they can have up to 1,500 calories.