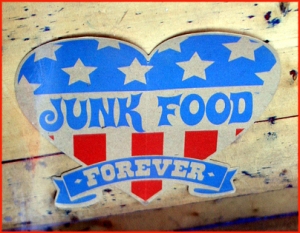 Obesity has been linked to everything from cancer to mental illness.  Now, a prospective ban on junk-food advertising targeting children is the subject of a hot policy debate by our friends down-under.

Many Australians are concerned about the growing childhood obesity epidemic and are looking for the cause – and the solution. Some, such as the Obesity Policy Coalition (a group of health agencies), blame junk-food advertising (and the companies that produce and buy the ads) for the growing problem. They want junk-food ads banned from television programming aimed at those under 16.

Others say parents are to blame. Weight-loss author Michelle Bridges says that she stands by her belief that ultimately parents are responsible for their children (and what their children eat). She asks: “So if we know that parental responsibility for a child’s weight starts even before conception, how can we justify the notion that their responsibility is in any way diminished during a child’s early life?” (Read more at SMH.com).
But the makers of fattening and not-terribly nutritious snacks and treats say, “Hands off.” They know that the millions of dollars spent on advertising empty calories really work!

Michele Obama, our first lady here in the up-over, began the federal Let’s Move campaign a year ago in her effort to bring awareness to the importance of eating right and exercising. Her web site lists tips for parents, kids, and schools.

C.R. and I don’t often weigh in (all right, a pathetic attempt at humor) at this stage of the polling, but here goes: If kids are involved in other activities such as outdoor play/projects, sports, homework, and the arts, rather than watching television or glueing themselves to the computer, they generally stay fit.

If they are engaged in healthy activities and play, they aren’t watching junk-food ads designed to entice them. The bottom line? Families have to decide what their priorities are and how they want their children to grow up. We agree with our first lady’s concerns, but worry that trying to stop a problem like this from the top-down may not be effective.  Getting people to change their personal and ethno-cultural behavior by government approaches hasn’t always worked so well.

McDonalds, that bastion of fat-producing junk-food masquerading as meals (sorry, but it’s how we see it), announced today their sales figures for April rose 6 percent! We suppose we should be happy for anyone doing well in this economy, but when low-cost/fast-foods sell well, it most likely indicates that people can’t afford to eat out elsewhere.  (Economists say that fast-food sales usually increase during recessions other poor economic times).

So who really is responsible for grabbing the reigns of the growing childhood obesity rates in Australia, the United States, and other countries and putting an end to this serious problem? Parents? Junk-Food Producers/Advertisers? Children’s Television/Web Site Producers? Government/Government-run Public Schools? Some of the above? All of the above?