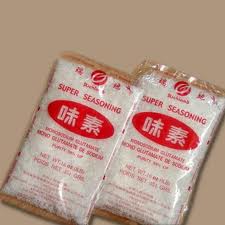 Researchers found that people who eat more MSG are more likely to be overweight or obese. And the increased risk wasn’t simply because people were stuffing themselves with MSG-rich foods. The link between high MSG intake and being overweight held even after accounting for the total number of calories people ate.

Ka He, a nutrition expert at the University of North Carolina, Chapel Hill, who led the study, said that although the risk of weight gain attributable to MSG was modest, the implications for public health are substantial. “Everybody eats it,” He told Reuters Health.

MSG is one of the world’s most widely used food additives. Although it tends to be more popular in Asian countries, Americans manage to get their share in processed foods, from chips to canned soups, even when it’s not labeled as such.

Americans’ typical daily intake of MSG is estimated to be only about half a gram, whereas estimates for Japan and Korea put average intakes anywhere between a gram-and-a-half and 10 grams a day.

MSG is considered safe, but some people complain of headaches, nausea and other bad reactions it.
Several studies have examined the potential link between MSG and body weight, with conflicting results. Scientists have speculated that people may eat larger helpings of food with MSG because it just tastes better. Other evidence suggests that MSG might interfere with signaling systems in the body that regulate appetite.

In the latest research, published in the American Journal of Clinical Nutrition, He and his colleagues followed more than 10,000 adults in China for about 5.5 years on average.

The researchers measured MSG intake directly by before-and-after weighing of products, such as bottles of soy sauce, to see how much people ate. They also asked people to estimate their intake over three 24-hour periods.

Men and women who ate the most MSG (a median of 5 grams a day) were about 30 percent more likely to become overweight by the end of the study than those who ate the least amount of the flavoring (less than a half-gram a day), the researchers found. After excluding people who were overweight at the start of the study, the risk rose to 33 percent.

Obesity is not as much of a problem in China as it is in the United States, which might suggest that MSG is not a significant culprit in weight gain. But the Chinese tend to be physically active, which might help offset the pound-producing properties of the additive, He said.

Why MSG and weight gain may be linked isn’t clear, He added, but it may have something to do with the hormone leptin, which regulates appetite and metabolism. He’s group found that people who consumed more MSG produced more leptin. “MSG consumption may cause leptin resistance,” He said, so that the body cannot properly process the energy it receives from food. That, He added, could explain why people who ate more MSG gained weight regardless of how many calories they consumed.

But Ivan E. de Araujo, a Yale University neurobiologist who has studied the effects of MSG on leptin, was not convinced by the new findings.

Leptin is released by fat cells, so as people gain weight they have more leptin in their blood, Araujo said. The effect of MSG on leptin levels, then, may simply be a reflection of growing body mass.
Araujo called the researchers’ suggestion that prolonged exposure to high quantities of MSG may trigger leptin resistance by damaging an area of the brain called the hypothalamus, “rather speculative, given the current lack of direct evidence that” MSG in normal dietary amounts could produce a physical injury to that part of the brain.

For a follow-up study, He and his colleagues hope to see whether people who stop using MSG experience any health benefits attributable to the change in diet.