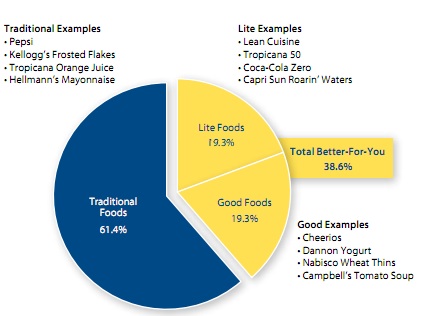 An interesting study [Download PDF] was published by the Hudson Institute and the Robert Wood Johnson Foundation last week. According to research

Food and beverage companies with a higher percentage of their sales coming from better-for-you (BFY) foods and beverages perform better financially, according to a new report from the Hudson Institute. These companies record stronger sales growth, higher operating profits, superior shareholder returns, and better company reputations than companies that sell fewer BFY products.
Researchers examined sales and other financial metrics for 15 major national and international food and beverage companies, including General Mills, Nestle, Campbell Soup  and Kellogg’s, from 2007 to 2011.

The companies with BFY portfolios showed a 50% growth in operating profit vs. 20% growth for the other companies. Although the Better-for-you foods account for only 40% of these companies’ sales, they were responsible for 70% of  revenue growth. Shares of the BFY rich companies outperformed those of their peers on S&P. Their reputation ratings were 30% higher than those of their peers.

What you need to know:
While this is potentially good news, unfortunately, many of the better for you foods and beverages are still a long way from being healthy foods and beverages. Healthwashing of junk foods is an ugly habit that many marketers have adopted in recent years as ways to jack up food prices and to increase sales.
Examples:

While moving up from a D grade food to a C grade food is nothing to be frowned at, consumers would do better to REDUCE their overall consumption of processed foods. This, unfortunately, is not in line with the interests of the majority of the food industry, which wants to sell more, not less. This friction will continue to be a source of friction in the years to come.

What to do at the supermarket:
Try to buy less processed foods. Avoid soft drinks. Drink tap water. Don’t settle for health claims on the front of pack – read ingredient lists and nutrition labels to decide if a “better-for-you” item is really healthy enough for your family.