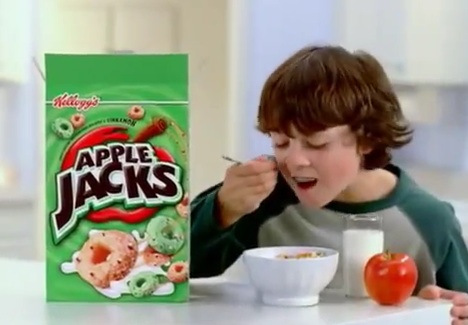 If you had a doubt as to the true alignment of your representatives when it comes to childhood obesity, last week Congress showed that all you need to do is follow the money trail. Lobbies representing the biggest food advertisers have gotten to our elected officials and convinced them that marketing Apple Jacks to children is just fine.

Because a cereal that is 40% sugar by weight is a healthy way for little Sally to start the day. And a cereal with hyperactivity triggering artificial dyes is a wonderful way for little Johnny to get in the groove on a school day.

Two years ago, Congress asked 4 agencies to review the marketing practices of the food industry when it comes to children, and to provide recommendations. The interagency working group (IWG), comprised of members from the FTC, FDA, USDA, and CDC sat diligently and came up with a set of proposed principles that would not be written into law, rather VOLUNTARILY accepted by the food industry.

Food marketers were very upset, and demanded changes to the proposals. So a  few months ago, unwillingly, the IWG weakened these voluntary guidelines.

But that was still not good enough. Last week, Congress shot down the proposals through the use of some lame “cost benefit analysis” rule:

The Consolidated Appropriations Act of 2012 includes a provision that requires the Federal Trade Commission and the three agencies that are part of the Interagency Working Group to conduct a cost-benefit analysis of the proposed guidelines. The move, considered a major victory for food and beverage advertisers, effectively delays release of the final guidelines, originally expected by the end of this year. More here…

What’s the cost benefit analysis? Well, if the voluntary guidelines were to be adopted, billions of dollars in advertising would not be spent, and even more billions in revenue would not be made. But kids would consume less crap. That sounds like a great idea for America’s children. But it’s “bad for business”.

Expect a 2012 filled with junk food commercials planted in our kids’ brains, and then later in their stomachs. Sigh.
–
Source