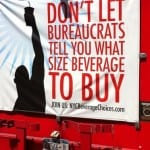 You’ve probably already heard that yesterday afternoon, just hours before New York City’s ban on the sale of extra large soft drinks was to go into effect, a New York State Supreme Court Judge struck it down as no less than “arbitrary and capricious”.

Reminder: earlier this year, New York’s City council, led by Mayor Michael Bloomberg, decided to take a bold step to curb obesity. Establishments regulated by the city, such as such as restaurants, movie theaters, delis, food trucks, and street carts, would no longer be permitted to sell single serve sugary soft drinks greater than 16 fluid ounces.

The “NYC Soda Ban” is very controversial and has raised many interesting points / counterpoints.  Here are the five main arguments cleverly crafted by the beverage industry:

1. Self control. People can control their buying habits. The government has no business telling us what to do. It can’t tell people what to eat or not to eat.

Counterpoint: If people could really control themselves, we wouldn’t be facing an obesity crisis of epic proportions today. Corporations are manipulating consumers through clever advertising, and behavioral economics (the super size soda is cheaper per fluid ounce) to reduce our self control to that of a 3 year old.

2. Education, not Legislation. The government should educate the public then let people make their own decisions!