And you thought you were doing your Grocery Shopping all by yourself…..
Posted on:Feb 4, 2014 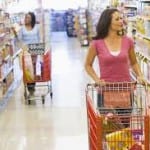 Marketers target with laser precision and identify ways in which both teens and adults can be made more vulnerable to persuasion while in the Supermarket.

I read and interesting book called “Book Salt Sugar Fat”, by Michael Moss.  He talked about a group established called the Retailing Research Council.  Their job was to guide the marketers toward their targets with laser precision and identify ways in which both teens and adults can be made more vulnerable to persuasion. Soda already rivals bread in grocery sales and easily tops other staples like milk, cheese, and frozen foods.

Food companies know how our brains work in a grocery store, and they pay big money for good placement.

In 2005, the council produced one of the largest studies ever undertaken about America’s shopping habits, and it was loaded with tips and advice

for grocers to increase their soda sales further still. The study included a “shopper density map,” done up in bright yellows and reds to mark the “hot spots” where most shoppers go. Whisked through the front doors, they typically start on the right side of the supermarket—moving counterclockwise and, in a surprise, from back to front. Thus, the main racks of soda should be placed toward the rear of the store, on the right side. By contrast, much of the center of store has light traffic, the report warns, calling this area the “Dead Zone.”

Consumer Reports says you can save even more by knowing how stores try to make you buy: piling items on end-aisle displays even if they’re not on sale because most people assume they are, posting signs such as “5 for $5” though there’s no requirement to buy all five to get the discount, and cutting sliced watermelon into chunks and tripling the price for the added convenience. But those tactics are just the tip of the iceberg.

“Most of the decisions we make in the supermarket are little ones, made in the midst of distractions–you’re on the cell phone, the kids are fighting,” William Poundstone, author of “Priceless: The Myth of Fair Value (and How to Take Advantage of It)” (Hill and Wang, 2008), said. “You’re operating on autopilot and don’t have time to think things through logically. In those situations, as marketers have discovered, we’re all very easy to manipulate.”

Indeed. We visited local stores and spoke to marketing experts to help you identify where the manipulation may occur and how to resist it.

What to look for

As you work your way through the store, you’ll probably spend somewhat less by shopping clockwise, according to Herb Sorensen, a consultant for retailers and manufacturers. Most stores have their main entrance on the right side, and their customers tend to move counterclockwise. When researchers compared those shoppers with people who went through a left entrance and shopped clockwise, they found the clockwise folk spent $2 less per trip, on average.

The produce department is usually near the entrance, and there’s a savvy strategy behind the location. In addition to imparting the message that “this is a fresh, healthy place,” Sorensen said, that placement gives shoppers license to buy cake and ice cream as a reward for picking up a head of broccoli or bag of apples. Also, be aware that bright white halogen spot lamps can make fresh food look more luscious. Strawberries appear redder, for example, and string beans greener.

As you walk the aisles, beware of “bumpouts,” displays and shelves that curve or jut out. They catch the eye and make merchandise more tempting, Sorensen says.

Look above and below eye-level shelves. Manufacturers sometimes pay retailers for valuable eye-level placement. In a study by the Cornell Food & Brand Lab, researchers watched shoppers buy 40 percent of the items in their carts from shelves that were within 12 inches of eye level.

When you reach the end of an aisle, don’t always expect a sale. Stores routinely reset endcap and other high-profile displays with sale items the day before the lower price takes effect (but without the new signs). If you grab and go too early, you’ll pay full price. Our reporter knows, because it happened to him.
Wherever you see offers for free stuff, make sure there’s no catch. “Most purchases are a gamble,” William Poundstone said. “You pay your money and hope that the product is as good as you thought it would be. ‘Free’ is a great sales pitch because you say to yourself, ‘I can’t regret this purchase because I got it for free.’ Unfortunately, you generally have to buy something else with the freebie.”

When you do pay, don’t be fooled if the price ends in “9.” It’s a practice known as “charm” pricing. Some researchers believe that shoppers see a jar of peanuts priced at $6.99 as $6 rather than $7, making it seem cheaper. Buyers have also been conditioned to associate prices ending in “9” with a bargain, Poundstone says. “We’re Pavlov’s dogs salivating at the 9 we associate with a discount,” he said.

Finally, at the checkout, double-check the receipt. Six percent of respondents to our survey said that they were overcharged, a figure that has been consistent since our 2005 survey. When an item scans at the wrong price, some chains will give it to you free, but you may have to complain forcefully.

Bottom line. If you’re unhappy with your store, fire it and look at the Ratings for a good alternative. Though each has its limitations, Costco, Trader Joe’s, and Whole Foods are high-rated stores available to many people across the U.S. Wherever you shop, save a bundle by using the tactics we’ve outlined.

So do you still think you are shopping by yourself?