The Dangers of Microwaves and Their Effects on Our Food
Posted on:Aug 31, 2015 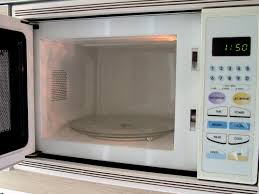 America’s most convenient appliance – microwave ovens seem to be an absolute necessity in today’s fast-paced world. They are currently present in at least 90% of homes in America thanks to their ability to cook and reheat foods or beverages in a simple, rapid way. The majority of people use this kitchen appliance without question and often thing microwaves just a simple alternative to conventional ovens. This page is here to tell you to think twice before using your microwave, as it could be one of the worst things you do for your own food.

What are microwaves and how do they work?

In short, microwave ovens are kitchen appliances which are used to cook or reheat food by emitting microwaves. Microwaves are a form of electromagnetic radiation and are on the low energy end of the energy spectrum, second to radio waves. The waves are generated by something called a magnetron – something found within every microwave oven.

Magnetrons produce an electromagnetic field with a microwave frequency of approximately 2,450 megaHertz (MGz), which is the equivalent to 2.4 gigaHertz (GHz). Microwaves produced within the microwave oven cause dialectric heating – they bounce around the inside of the oven and are absorbed by whatever is placed in the oven.

In order for something to heat in a microwave oven, water must be present within the substance. If water is not present, heating will not occur and it would remain cool. The reason for this is that water molecules within the food vibrate at incredible speeds, creating molecular friction which is responsible for the heating of the food. The structure of the water molecules are torn apart and vigorously deformed. This is much different than any other method of cooking, as other methods such as convection ovens heat up food by transferring heat convectionally from the outside inward.

“There are no atoms, molecules or cells of any organic system able to withstand such a violent, destructive power for any extended period of time, not even in the low energy range of milliwatts… This is how microwave cooking heat is generated – friction from this violence in water molecules. Structures of molecules are torn apart, molecules are forcefully deformed (called structural isomerism) and thus become impaired in quality.”

You might wonder why food is often unevenly heated when taken out of the microwave. The uneven heating occurs because microwaves work with whatever water molecules are present, and since not all areas of food contain the same amount of water, heating becomes uneven.

While microwave cooking does begin within the molecules where water is present, they don’t actually cook from “the inside out” like many people believe. They actually start with the outer layers while the inner layers are mostly heated and cooked simply by transference of heat from the outer layers. This is oftentimes why you’ll find that the outside of the food is extremely hot while the inside seems to have been absent during the re-heating or cooking.

Other forms of ionizing radiation are visible light, ultraviolet and infrared waves, and waves emitted from televisions, cell phones, and electric blankets.

To learn more about radiation, click here to view our radiation page.

Today we live in a technologically advanced world. We could label the time we live in as the “technology age” as well as the “radiation age”. People today are bombarded with radiation from almost everything around: radio towers, televisions, cell phones, microwave ovens, computers, satellites, broadcast antennas, and so much more. Unfortunately, radiation doesn’t go away over time, in fact, it just accumulates.

Although humankind has conducted study after study concluding that no amount of radiation is safe, we don’t really know what all of this means in the long term. But here is what we do know:

We simply don’t know the long-term effects of radiation, so why risk it by watching your food cook in your microwave day after day and night after night?

Who shouldn’t use microwave ovens and why?

No one should be using microwave ovens. This is especially true if you are a baby, a child, are pregnant, already suffer from illness & disease, or are already bombarded with more radiation than the average person.

You may suffer from “Microwave Sickness”

Tissues directly exposed to microwaves are subject to the same deformities molecules go through, and this can in turn cause you to experience “microwave sickness”. Remember, it isn’t just microwave ovens which emit this kind of radiation. Cell phone towers also emit this type of radiation.

People may experience any or all of the following after being exposed to high levels of microwave radiation.

Robert O. Becker, author of The Body Electric, stated the following on page 314 in his book:

In another book entitled Health Effects of Microwave Radiation, author Dr. Lita Lee also expressed his concern over the use of microwaves. Dr. Lee observed that the symptoms listed above could be caused by certain observations shown below.

Foods which haven’t been processed or cooked and are naturally occurring contain life energy which is transmitted from the sun. Biophotons are the smallest physical unit of light which are stored in all life forms. They contain bio-information  and are partially responsible the feelings you get which signify well-being and vitality. Foods like naturally grown vegetables and especially sun-ripened fruits are the main source for these biophotons to humans.

Microwaving food, in effect, potentially destroys and depletes the life energy, rendering the food completely dead and lifeless. In addition, the food’s nutritional value is lost and it becomes nearly useless in terms of providing any real health benefit.

Microwaves were first invented by the Nazi’s in order to provide a method of cooking  for their troops during World War II. Seeing as though these microwave ovens have been experimental and new, the US War Department was assigned to research these new devices shortly after the war.

Turns out, the U.S. didn’t really perform the extensive research necessary for the new invention. Instead, the Russians decided to tackle the issue with extreme force.

Intrigued by this new device, the Russians conducted in-depth research to discover the biological effects they might possess. The results were staggering enough to lead to a ban of the new device in the Soviet Union. The ban, however, was later lifted during Perestroika, the political movement responsible for the restructuring of the Soviet Union.

Twenty years of the Russian research led to the international warning about the damaging biological and environmental effects microwaves possess. The warning also included other similar frequency electronic devices such as cell phones.

Although there hasn’t been as many studies on microwaves as say, the importance of various vitamins and minerals, all of the studies generally agree on one thing: nutritional value is significantly reduced if you microwave food. You’d think that studying microwaves would be at the top of the list, given their place in our society, but evidently their role is not significant enough for more thorough testing.

Note that most of these studies have been done prior to 2000. This may be due to the shift of focus from microwaves to a more prevalent threat to humanity: the intense electromagnetic chaos from electromagnetic devices such as cell phones, computers, and advanced technology. Here are some studies illustrating the detrimental effects of microwaves and microwave cooking.

Hans Hertel, a Swiss food scientist, initiated the first tests on microwaved food and microwave cooking to determine how microwaves affect human physiology and the blood. After studying these effects, Hertel concluded that microwaving food leads to food degeneration. These degenerative changes in nutrients caused changes in blood which could cause health problems.

Health issues which could be caused are:

Another study found that microwave frequency radiation affects the heart at non-thermal levels – levels which are well below federal safety guidelines. To examine these effects, the study used a 2.4GHz radiation frequency, which is the same frequency emitted by microwave ovens as well as wifi routers.

There is even evidence that this same frequency can cause elevated blood sugar levels in certain people. This points to the possibility that there may be a type 3 diabetes generated by dirty electricity. Here is a video below making a presentation support this. You may find the video “slow”, but it’s well worth 7 minutes of your time.

There doesn’t seem to be any reason to use microwave ovens when comparing benefits and the risks. Even if all of the information, all of the studies, and all of the people speaking out against microwave ovens didn’t know 100% that these devices were harmful, is it really worth the risk for a little convenience? No one voicing the dangers of microwaves has an agenda. This care is pure, and it’s an issue that is seriously alive. Avoid microwave cooking and avoid the carcinogenic substances that are created from it.

If you’re skeptical of this information, at least minimize your use of the device just in case, until you come to a different decision.

Although the dangers of microwaves aren’t the biggest problems facing society, they are still very prevalent and extremely easy to avoid.