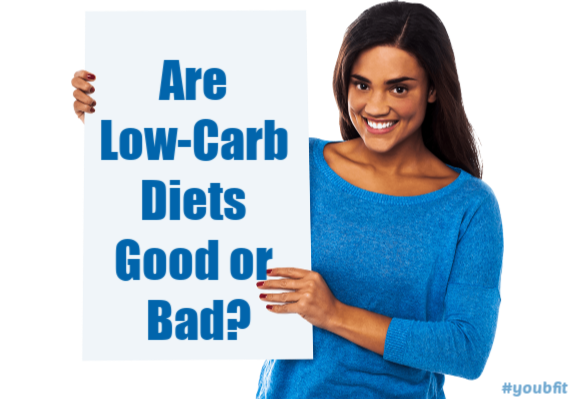 Ask almost anyone what they need to do to lose a few pounds, and they’ll probably say: “Cut back on the carbs.”

As a weight loss strategy, cutting carbs (while reducing the total number of calories) clearly works pretty well for some people.

But here’s the thing. Most of us require some level of carbohydrates to function at our best over the long term.

Okay, so let’s get into the basics. What is a carbohydrate?

Each gram of carbohydrate contains four calories. All carbohydrates are made of sugar molecules. Carbs are a key source of energy, and they include fruits, vegetables, pasta, bread, cereals, rice, and sweeteners such as table sugar and honey. Paramount in your calorie selection is getting the right kind of carbohydrates.

A carb’s rate of absorption produces a proportionally strong release of the hormone insulin, which regulates the amount of sugar in the blood. When we consume foods with fast-absorbing sugars, such as soda or fruit juice, a strong insulin reaction depletes blood sugar and converts these carbs to fat, leaving us feeling tired and craving more food to restore normal blood-sugar levels. Consumption of rapidly absorbing carbs is a leading cause of obesity.

You will find that almost all raw vegetables and fruits with higher amounts of fiber, like apples and pears, have a much lower glycemic index than most grain products, which includes everything from bread to pasta to rice. These unprocessed natural sources should be chosen because they have slow rates of absorption, low-calorie content, and large amounts of fiber, water, and micronutrients.

The problem with most processed foods that come nicely packaged in pretty boxes is that the sugars from these sources absorb into the bloodstream quickly and provide large amounts of calories with little nutritional value. Especially if you want to lose body fat, your carbs should consist mainly of raw vegetables and whole pieces of fruit with low glycemic indices.

In general, whether eating vegetables, fruits, or other sources of carbs, stick with foods that have a glycemic value of less than 55, unless you’re looking to gain fat. The occasional higher-glycemic-value foods that we do end up eating (for sanity reasons) should be consumed—within your caloric limits—as part of a meal, with balanced macronutrients and at least some raw vegetables and/or whole pieces of fruit.

So here is the problem with not eating carbs.

As a weight loss strategy, cutting carbs (while reducing the total number of calories) works pretty well for .

Here’s the thing, though: Carb reduction costs us.

Like I said earlier, most of us require some level of carbohydrates to function at our best over the long term.

Of course, you can cut carbs temporarily if we need to lose weight quickly. But for most of us, keeping carbs too low for too long can have disastrous consequences.

This is especially true for those of us who Work Out.

If you’re sedentary, your carb needs are lower. So you might be able to get away with more restriction.

But if you like to exercise regularly and enthusiastically, restricting your carb intake too drastically can lead to:
decreased thyroid output

You are going to feel lousy, spaced-out, sluggish, cranky… and maybe even sick.

We now know that eating too low-carb for too long can cause significant disruptions to many hormones.

This seems especially true for women, whose bodies may be more sensitive than men’s to low energy or carbohydrate availability (perhaps because of the evolutionary importance of having enough body fat and nutrients to sustain a pregnancy).

With all this said, here is the problem with low-carbs:  Many women try to eat low-carb, wanting to be healthier.

So, let’s talk about Muscle Loss

When we think about building muscle, we usually think of protein. But research shows that lowering carb intake can affect your muscle mass even if protein remained constant.

In other words, even if you’re guzzling protein shakes or eating steak 5 times a day, you could be losing muscle if you aren’t getting enough carbs.

High carbs lead to insulin which leads to fat storage. Low carbs keep insulin low, which should get you effortlessly lean while you enjoy chicken wings, salmon, eggs, and butter.

Yes, many people who try low-carb dieting are initially pleased by an immediate weight loss… which is mostly water and glycogen. So, in the short term, it seems like low-carb diets are superior.

Research says no. Over the long haul, any differences between low-carb and other diets even out.

Most of us will look, feel, and perform our best when we balance a reasonable amount of lean protein, quality carbs, and healthy fats.

You should not be looking for a Diet, your objective should be creating a Lifestyle Change.